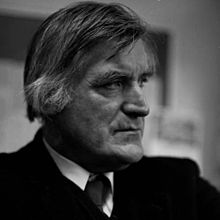 Edward James “Ted” Hughes, OM (17 August 1930 – 28 October 1998) was an English poet and children’s writer. Critics routinely rank him as one of the best poets of his generation. Hughes was British Poet Laureate from 1984 until his death.

Hughes was married to American poet Sylvia Plath, from 1956 until her suicide in 1963 at the age of 30. His part in the relationship became controversial to some feminists and (particularly) American admirers of Plath. His last poetic work, Birthday Letters (1998), explored their complex relationship. These poems make reference to Plath’s suicide, but none of them addresses directly the circumstances of her death. A poem discovered in October 2010, Last letter, describes what happened during the three days leading up to Plath’s suicide.

In 2008 The Times ranked Hughes fourth on their list of “The 50 greatest British writers since 1945″.